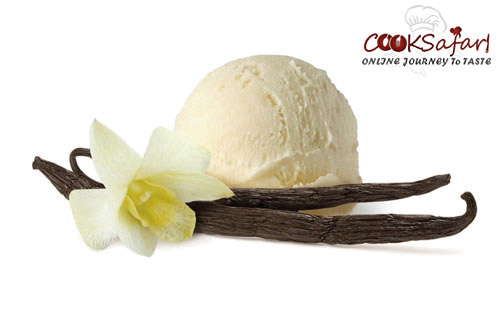 Vanilla is the second most expensive spice in world after saffron. Vanilla is a flavoring derived from orchids of the genus Vanilla, primarily from the Mexican species. Vanilla grows as a vine, climbing up an existing tree (also called a tutor), pole, or other support. Its growth environment is referred to as its terroir, and includes not only the adjacent plants, but also the climate, geography, and local geology.

Initial attempts to cultivate vanilla outside Mexico and Central America proved futile. The reason was that the vanilla orchid requires local spices of mountain bee for pollination. This bee provided Mexico with a 300-year-long monopoly on vanilla production. The only way to produce fruits without the bees is artificial pollination.

The distinctively flavored compounds are found in the fruit, which results from the pollination of the flower. One flower produces one fruit.  These seed pods are brownish red to black when ripe. Inside of these pods is an oily liquid full of tiny seeds. They lend a powerful flavour to food. Both the pod and the seeds are used in cooking.

Vanilla essence occurs in two forms. Real seedpod extract is an extremely complicated mixture of several hundred different compounds; Synthetic essence consists of a solution of synthetic vanilla in in ethanol.  one of the most popular flavoring agents and in used in Vanilla Ice cream, Vanilla Cake. Eggless Vanilla cake.

The scent of vanilla could help you feel less stressed. A study done at Tubing en University in Germany proved that vanilla aromas helped reduce the startle reflex. The fragrance of vanilla is also said to ease tension.

Researchers have found that Vanilla Pods are anti- bacterial in nature.

Vanilla extract is derived from the pod after steeping it in alcohol and water. Pure extract has no sugar added. But the essence is thinner and is synthetic flavoring, obtained commercially. Vanilla bean paste is made with bean seeds crushed into a fine paste. All three are used as popular food and drink flavoring.

Vanilla is considered an aphrodisiac, and this was proved long back by the Aztecs. According to folklore, Xanat, the daughter of the Mexican fertility goddess, loved a Totonac youth. She was unable to marry him owing to her divine nature, so she transformed herself into a plant that would provide happiness. This plant was then called the vanilla vine.

As a Room Freshener

Forget that exotic room freshening spray, Vanilla is a popular aromatic for your home too. So the next time you have guests over just tie together a bunch of bean pods and place them in a vase and place them as a table centre piece.

View all posts by CookSafari →