Pradhaman or payasam, or kheer is a traditional Kerala dessert. Payasam containing husked green gram (moong dal) or cherupayar parippu is called Parippu Pradhaman. It is prepared chiefly using moong dal, coconut milk (nariyal ka doodh) and jiggery (gud). The combination of sweet jiggery and the warm blend of coconut milk taste heavenly. Ideally, coconut milk of three coconuts is added in the payasam. Coconut milk is extracted three times to achieve this. The first extract has a thick and rich consistency, the second extract has medium consistency, and the third and final extract is the most dilute one. These various consistencies can be attained by adding water at different stages of extraction. It should be kept in mind that the rice and moong dal mixture is supposed to be boiled by using the third coconut milk obtained, that is, the most dilute one. Careful attention has to be paid when the rice starts boiling. At a stage when the mixture is half-cooked, the second coconut extract (milk) is to be added. After proper boiling and addition of jiggery, the first coconut extract (milk) is added. Addition of spices like cardamom powder (elaichi), ginger powder gives nice aroma to the recipe. Once done it is topped with fried dry fruits and coconut. Parippu Pradhaman is a big hit with the crowd during Onam festival.

If you are looking for more Malabar desserts do check Paal Paayasam, NinthraPazahm (banana) Pradhanam, Unnakaya

How to make Parippu Pradhaman 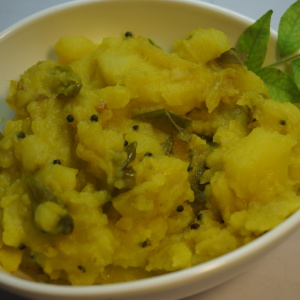